As farmers who immigrated to Ontario from England in 1865, the Strongman family continued the farming tradition for generations. Then, in the 1908, at the age of 21, William Arthur Strongman decided he’d had enough of farming and moved to Toronto to pursue his fortune.

In the big city, Arthur built an apartment building and opened a grocery store. As a landlord maintaining several apartments, he later opened a paint store as a secondary investment and also worked as a decorating contractor.

His son, Delbert, eventually joined his father and later, Delbert’s two younger brothers, Morley and Bruce also came along. Sensing a more lucrative opportunity in the contracting business, the brothers turned their attention towards expanding their father’s decorating business and paint store. They worked hard as painters, wallpaper hangers and wallpaper distributors. To further subsidize their incomes, they also began making paint in a small building at the back of their retail store.

The business took off, and in 1948, the brothers bought out their father and established Tonecraft Paint and Varnish. With the end of the war and a booming Canadian economy, the Strongman brothers found themselves the proud owners of a thriving paint manufacturing business. During the 50’s and 60’s the business continued to grow and prosper.

By 1970, Tonecraft Paint and Varnish had now evolved into the highly successful Color Your World company, with stores expanding into every major city in Canada. As an important part of their business plan, the Strongmans had also purchased as much of the real estate as possible where each of their new stores was located.

When Color Your World was finally sold in 1984, the family retained their real estate holdings and began managing the assets. This transition was actually a natural evolution. A large part of their business now had to do with managing leases and maintaining properties for their tenants and franchisees.

Over the next 25 years, Paul, and Gerry Strongman, were able to build their real estate portfolio into a multi-million dollar enterprise. In fact, the original Color Your World holdings now constitute a small part of the company’s total assets.

He was a committed philanthropist and created and sponsored numerous funds and charities both in Vancouver and Jamaica where the family maintains a residence. The charity closest to his heart and that of the family is the Seanna and Nicole Strongman Memorial Fund. 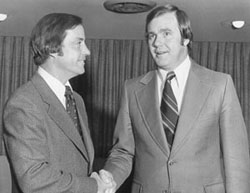